Jennifer Meta Robinson, Ph.D, Professor of Practice in the Indiana University Department of Anthropology, will receive the 2016 Distinguished Service Award from the International Society for the Scholarship of Teaching and Learning (ISSOTL) at the organization’s annual meeting on October 13 in Los Angeles.

“Teaching for learning should be the paramount goal for all involved in higher education. And doing it well has never been more important or more complex. Scholarship based in disciplinary practice is one of our most promising leads for fostering an equitable, flourishing future,” Robinson says. “ISSOTL’s leadership in international conversations challenges educators around the globe to rethink and rework teaching, authorize new voices, and organize expertise in service of their highest educational aspirations. It is an honor to receive this recognition.”

Robinson was a founding member of ISSOTL and served as President 2008-2011. She co-organized the group’s first annual conference in 2004 at Indiana University in Bloomington, attended by 400 delegates from a dozen countries and officially inaugurating the Society. Her major achievements as president involved leading numerous initiatives to professionalize the Society to be sustainable into the future—including staffing, conference organization, and a scholarly journal. She was elected the first Vice President representing the United States and served on the Board of Directors during its writing of the bylaws. She chaired the conference again in 2009, bringing it back to Bloomington. She has served in a leadership capacity on numerous Society committees, most recently as co-chair of the Advocacy Committee. She continues to serve as the Society’s representative to the State of Indiana, where it is incorporated.

ISSOTL “serves faculty members, staff, and students who care about teaching and learning as serious intellectual work. The goal of the Society is to foster inquiry and disseminate findings about what improves and articulates post-secondary learning and teaching,” according to its website. Each year, the ISSOTL Board organizes a public call for nominations for the Distinguished Service Award (DSA). This award is aimed at ISSOTL members who have served the field in distinguished ways for a period spanning a significant part of their career as faculty members or leaders in higher education. The Board may make up to two such awards per year. The award will be presented by immediate Past President Anthony Ciccone, Emeritus Professor of French and former director of the Center for Instructional and Professional Development at the University of Wisconsin-Milwaukee.

The award is given for a widely acknowledged reputation in the field of the Scholarship of Teaching and Learning, significant contributions to the work of ISSOTL, a profile that will enable them to take on an advisory/representational role for ISSOTL, and evidence that they espouse the values of the Society. Contributions may include active leadership in ISSOTL, evidence of sustained SOTL leadership impact, significant advocacy and/or “going public” roles at the national and international level. Currently, the award is a framed certificate and life membership in ISSOTL. Robinson was recommended to the Society’s Board of Directors by a selection committee that included the Society’s President, a past winner of the award, and a student representative from the Board.

Robinson has a Ph.D from Indiana University. She formerly directed IU’s Campus Instructional Consulting office and its award-winning Scholarship of Teaching and Learning Program. She has won awards and grants for her teaching and research, most recently a Scholarship of Teaching and Learning Grant and a Student Learning Analytics Fellowship from IU’s Office of the Vice Provost for Undergraduate Education. She teaches, publishes, and speaks widely on the cultures and practices of teaching and learning in higher education. Her recent research and teaching have focused on preparing graduate students for teaching in the academy, including introductory and advanced courses on college pedagogy and mentoring of associate instructors in the teaching of culture and communication. Her research also includes books and articles in food studies. She co-edits the Indiana University Press book series Scholarship of Teaching and Learning.

Previous award winners include IU Bloomington Professor Emeritus of Biology Craig Nelson (2009) and IUPUI Professor Emerita Barbara Cambridge (2011), both of whom served as founders and presidents of the Society. Other luminaries receiving the award reflect the Society’s international scope, including Lee Shulman, former president of the Carnegie Foundation for the Advancement of Teaching (2013); Keith Trigwell, Professor of Higher Education at the University of Sydney (2010); Michael Prosser, formerly the executive Director at the Centre for the Enhancement of University Teaching at the University of Hong Kong (2010); and Gary Poole, Professor Emeritus in the School of Population and Public Health in University of British Columbia’s Faculty of Medicine.

Expressions of Interest to Host the ISSOTL Conference in 2019 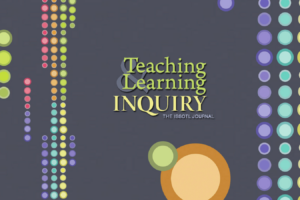 Applications are due March 1, 2022. The International Society for the Scholarship of Teaching and Learning (ISSOTL) invites applications for group members for the inaugural cohort of its public SoTL track of its International Collaborative Writing Group (ICWG) initiative. ISSOTL …